Van Gogh, but by Nature! With a potted sunflower you can allow the large, cheerful flowers to shine throughout your home.

You may associate sunflowers (the official name is Helianthus) with gardens and fields, but it's also available as a charming houseplant that allows the sun to shine indoors as well. It's a cheerful, full plant with plenty of leaves and substantial flowers that tower above all that foliage. The potted sunflower is a surprising houseplant that does well in a modern interior and fits perfectly with the growing need for clarity and beauty without pretension. 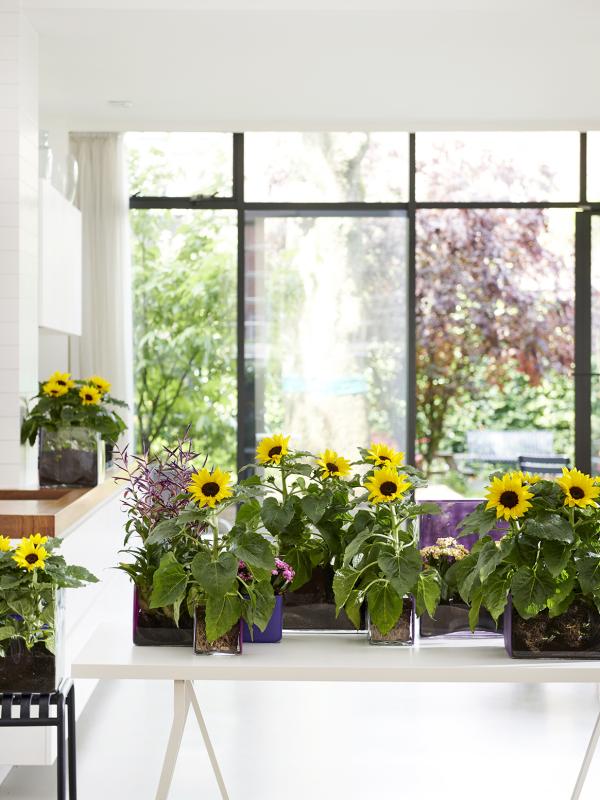 The sunflower is an extremely uncomplicated houseplant: one colour, one shape. The potted version doesn’t grow as tall as the sunflowers that bloom outdoors, but it does offer those unique cheerful bright yellow flowers and the dark heart of a real sunflower with attractive dark green leaves below. The potted version does not produce pollen. This means that the sunflower continues looking beautiful for longer and blooms for considerably longer than the outdoor variety. It also has a long availability period for a flowering plant, from April to the end of August.

Sunflowers originate from North and South America. Native Americans planted the seeds on the north side of their fields as the ‘fourth sister’ of the familiar combination of maize, bean and pumpkin plants that help one another to grow. Spanish sailors brought the sunflower to Europe in around 1530. The seeds grew easily and so sunflower seed became part of our food: it was eaten, roasted and turned into oil. The flower has been bred from a garden giant to a houseplant, but has always maintained its familiar appearance.

The sunflower was an Inca icon: they revered the flower as a depiction of their sun god because the head always turns towards the sun and turns back to the east at night. This is called heliotropism. The plant has retained ‘sun’ and ‘radiance’ as its symbolic meaning, including in other parts of the world.

Do your bit to help the bees
Care

...and save our food systems at the same time
Care