Strong structure, attractive shape and a real feature throughout the year thanks to their unique colours. Blue conifers bring colour to a (winter) garden, but also create a serene look, particularly during times of snow and frost.

Blue conifers are elegant garden plants that do well in hedges, containers or planted solo in the garden as an unusual colour element. The range is extensive, and can be broadly broken down into column, cone and plateau shapes. They're woody plants categorised under pine trees. The unusual colourings mean that - unlike their green relatives - blue conifers are often used as accent plants. Use them to create an unusual ambience and strengthen a specific viewpoint. They’re chic shrubs that are known as ‘the aristocrats of the conifers’.

Picea Pungens Super Blue is also known as blue spruce, thanks to its silver-coloured needles. This beauty can reach a height of three metres. Juniperus Squamata is a fabulous juniper with fine leaves which is often used as an accent plant. Ellwoodii grows upwards, tall and slender like a dwarf cypress. The leaves are scale-like and lie tight against the twigs. Stricta is also known as Chinese juniper with an upward growth and branches that spread out vertically. What’s remarkable about this conifer is that it turns more blue in winter. The colour of all blue conifers are caused by a special layer of wax on the needles that reflect particular wavelengths of light. That’s why a blue conifer often appears to be a different shade in the spring/summer light than in the darket autumn/winter light. 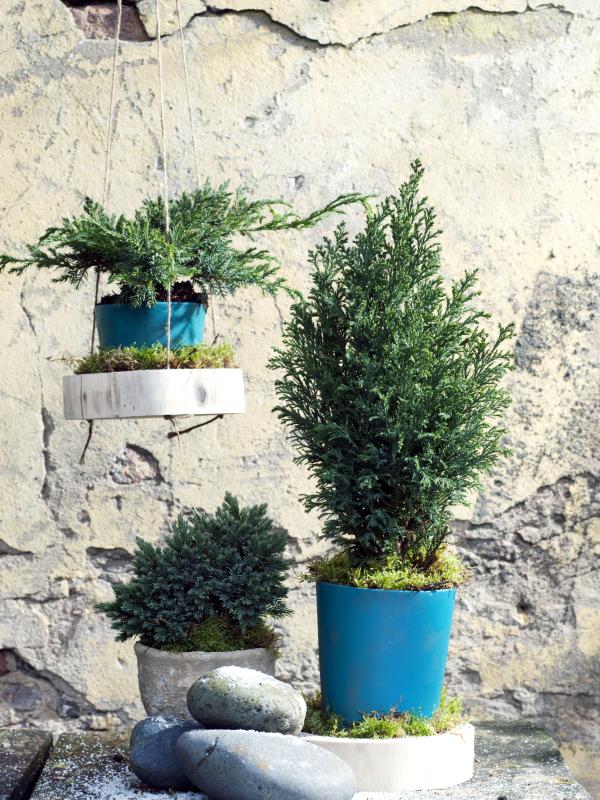 Dating back to the

Blue conifers are woody plants categorised under pine trees. As far as we know, conifers were the first group of plants which propagated itself with seeds some 230 million years ago in the Permian geological era. Prior to that, plants divided or propagated by means of spores.

The ancient form is only known as a fossil, whilst its descendants crop up everywhere in the wild, but particularly in regions with a temperate climate. Nobody knows precisely where the first blue specimens developed: traces of a similar age have been found in Colorado, Sweden and the Russian taiga. Blue conifers can easily reach a height of 23 metres in the wild, but 15 metres is the maximum in a garden. The dwarf varieties stay smaller: between 1 and 3 metres.

All articles about Blue conifers

Spring 2016: a garden packed with secrets

Spring trend: the garden that embraces you