An abundance of shiny green foliage, a profusion of eye-catching flowers and easy-going. An added bonus is that the hibiscus peaks when the rest of the garden is getting past its best.

Opulent flowering, sweeping branches and appealing flowers that you want to touch to check whether they really are real. Garden hibiscus is a relaxed bloomer that gives the whole garden a boost at the end of the summer. Hibiscus syriacus, as it is officially called, is also known as rose mallow. It’s a fresh green plant that is also grown as a standard tree. Garden hibiscus blooms from July until the autumn with magnificent bell-shaped flowers that can have single or double petals that range from violet to red, yellow, lilac and pure white. They all have a crimson heart with fantastic stamens.

Hibiscus is hardy, but develops very late so don’t think that the plant has died if it’s still bare when the rest of the garden has come to life. Garden hibiscus just needs a bit longer to emerge from its rest period. Hibiscus also reaches peak flowering later, in August and September. When the rest of the garden is past its peak, this shrub bursts into action and produces endless new buds. One of the most magical aspects of garden hibiscus is that the flowers mainly close in the evening and open again the next day in the sun. The plant really follows the rhythm of life. 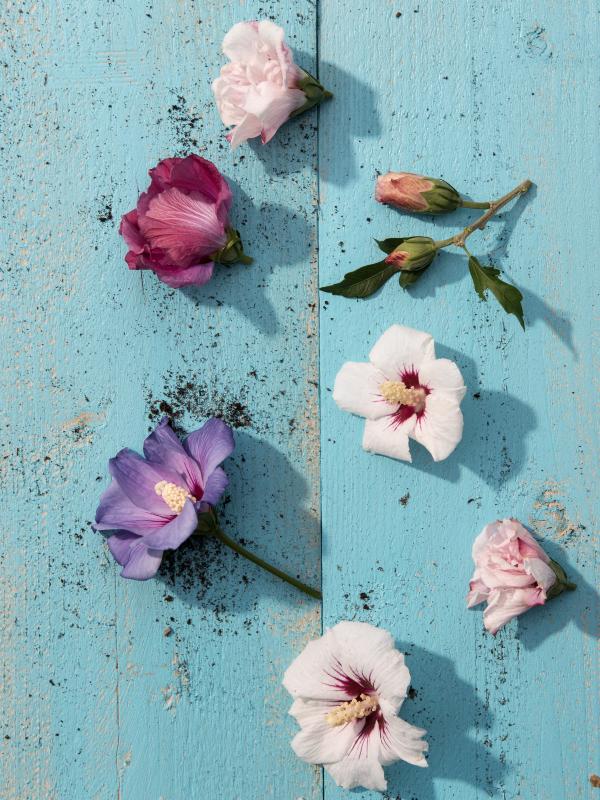 Hibiscus is a genus of some 220 plants that are native to subtropical and tropical regions. The plant originates from China and travelled to Western Europe via India, Syria and Turkey. It made a big impression en route: even the Taj Mahal features hibiscus motifs. Here in Europe the garden hibiscus has been a popular plant since the 19th century. It deserves a good position, because then it will last for a long time with  more beautiful flowers every year.

The fact that the hibiscus has such a flamboyant tropical image despite the fact that the plant actually originates from temperate regions in China is thanks to impressionist artist Paul Gauguin. He often included the flowers in the paintings that he painted on Tahiti. In 1892 he even devoted an entire work to the shrub, fittingly called 'The Hibiscus Tree’. His work became so world-famous that the hibiscus unavoidably acquired a hint of the exotic, despite the fact that the first known depictions on Chinese porcelain were actually very restrained.

Caring for the Hibiscus

All articles about Hibiscus

Get into The Great British Bake Off spirit
Food

Delectable tea from your own garden

When the sun comes out and the mercury rises, hibiscus, our hot plant for July, reveals that it has a